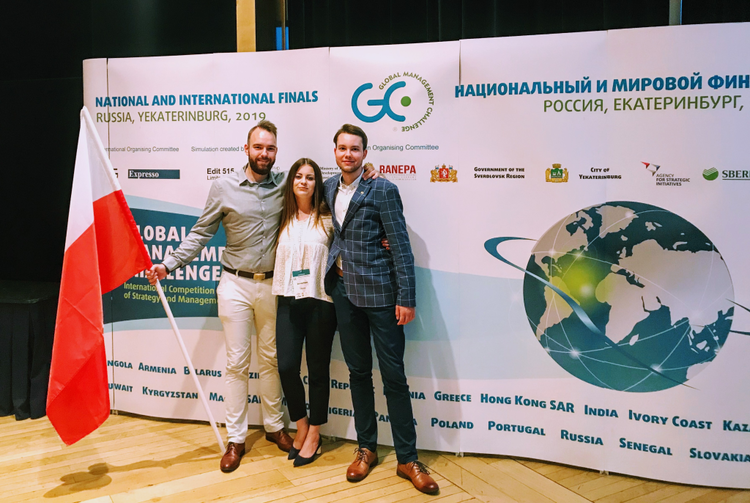 After two days of fierce competition, a team from Katowice University of Economics scored 7th. The finals were held in Yekaterinburg, Russia.

This year’s global finals had 19 teams from nearly 20 countries participating.  The contestants met in Russia on July 5 and spent then next 2 days playing the roles of CEOs, taking strategic decisions regarding their companies. Poland was represented students from the Katowice University of Economics, scoring first in their group after the first business decision cycle. After five decisions, they finished 2nd, qualifying for the grand finale to take place the next day. There, our team competed with Russia, China, Portugal, Slovakia, Macau, Hong Kong and Côte d’Ivoire. Ultimately, students from Katowice scored 7th in the global ranking. The next, 20th global finals will take place in Porto, Portugal. BIGRAM Personnel Consulting is responsible for the Polish finals .

„GMC showed me how difficult it is to be a manager. I used to think there were no perfect decisions out there. It turns out there are – on the verge of the impossible. When they emerge, though – they are the cornerstones to success. We managed to take two decisions like this. One made us the Polish Champions, the other helped us qualify for the finals in Russia.” – says this year’s GMC finalist, Marcin Szewczyk.

BIGRAM is the sole Global Management Challenge representative in Poland organizing the finals Polish editions of the competition since 2000– this year we will be celebrating the 20th anniversary edition. Over the 20 years of GMC presence on the Polish market, nearly 30,000 participants and 350 companies took part in the simulation – This is an impressive result showing how aware organizations are of the benefits brought by their involvement in the game. The GMC simulation teaches management, collaboration and brings the teams closer together. It is also used as a recruitment tool to search for talents and enhance the brand value.